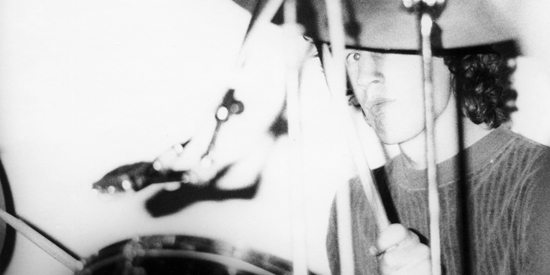 
So, I'm walking around North Beach with Mitchel Holman, killing time before we hit the stage at the Mabuhay Gardens. The year was 1980, I was 21 years old and the band was Mindsweeper. Most likely we were going to be playing to a less than full house, again. We were the middle of 5 acts that night. As we were heading back to the club we stopped at Enrico's for a drink and to kill some more time. We sat down at the bar and I noticed there were only two other people there, sitting directly across from us.
"That guy looks like Frank Zappa" I said to Mitchell.
"It IS Frank Zappa," he replied, "and the other guy is his body guard so you probably shouldn't . . ."
Before he could finish talking, I was on my feet and made a bee line for Frank. I must have been pretty quick, because I was able to get between Frank and his body guard and say hello before the guy had a chance lay a finger on me. The guy was so big he could have sent me sailing through the front door with a swipe of his hand. Frank waved him off and I got to introduce myself. He was very gracious and asked me what I was doing.
I told him I was working with Mindsweeper and invited him to the show. He said he was waiting for Aynsley Dunbar and that they would stop by in a while. I told him I would get them on the guest list and see him later. I left thinking, "What the fuck? Like Frank really needs to be on a guest list and I'm doing him a favor? I'll see you later? . . . like we re old friends?" I was young. What did I know? I just hoped he would show up.
As we walked back to the club Mitchell asked me what he said.
"Oh, not much." I replied, "But, he's bringing Aynsley Dunbar to see us".
Mitchell muttered something like, "I guess we better be on tonight".
When we got to the club, I told Dink that I needed 2 more on the guest list.
He said, "No way. We already have too many."
"No problem," I said. "I'm going out to tell Frank Zappa he's not on the list."
Dink looked at me and then at Mitchell. "It's true," Mitchell confirmed.
Without missing a beat Dink says, "OK, Frank is on the list. Rory, your friends are off".
That was cool with me.
Frank and his party arrived at the club in time to watch some of the crappy bands that were on before us, and in those days there were many. I was afraid they would get bored and leave, but when we hit the stage they were still sitting there.
After our set, Frank and Aynsley came over and sat with us and hung out for a while. They were very complementary. We all shook hands when they left.
I was walking on clouds for a few days after that. Both of those guys were musicians I had listened to and admired growing up. I never thought I would get a chance to meet them let alone have them come see me play. And it wouldn't be the last time that happened.

A postscript by Dink: Rory was not the only one to invite Frank to that show in December, 1980 (a day after John Lennon was assasinated). Kim, our roadie, also spotted Frank at Enrico's having a cup of coffee with his bodyguard, and went over and told him to come to the show, adding a bit of hype to the invitation. Kim was a huge fan, as he should have been. He hauled the gear for free. My favorite memory of Kim is of him carrying the gear out of Club Utah to our van. He was always casual about moving the gear, joking, laughing, getting the job done in as carefree a way as possible to keep the 3AM experience light. Carrying a very heavy speaker cabinet on his shoulder, he lost his balance and tipped it into a large plate glass display window in a shop next the venue. The disturbing sound of glass breaking was followed by my voice, "So, now what do we do?" Kim immediately pulled the cabinet out of the display, careful not to cut himself on the jagged glass, and said, "Get the hell out of here, of course."